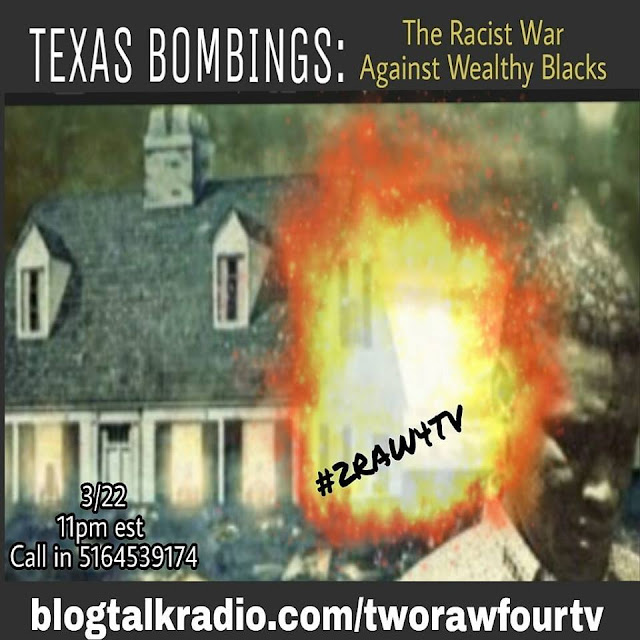 #BREAKINGNEWS THE AUSTIN BOMBING SUSPECT SUPPOSEDLY BLOWS HIMSELF UP AFTER SWAT YEARS APPROACHED HIS CAR....THIS IS #FAKENEWS.... A 4th package bomb sent in March just exploded at the house of a prominent Black family in #Texas, severely injuring a teenager. All of these bombings have targeted suburban and well to do Black people. In all the bombings the white neighbors of the victim "didn't see" anything suspicious. Since integration many Black people strive to "make it out the hood" to seemingly escape the issues of the inner city, the drugs, #policeterrorism, #racism. As long as you're BLACK in America there always seems to be some outside problem that plagues you, no matter your economic status. You can't buy your freedom. You can't buy out #racism. No matter how much money you have racism will always be more valuable in the land of mayonnaise. Now, more than ever, rich Black people are figuring it out and aligning themselves with revolutionaries. Will you have to be BOMBED into consiousness? Next #2RAW4TV we will be discussing these series of explosions that are rocking Black people in Texas to the core! TEXAS BOMBINGS: THE RACIST WAR AGAINST WEALTHY BLACKS. It's time to get on one accord and we will be doing just that next broadcast. Be the Victor not a victim #TUNEIN
3/22
11pm est
Call in 5164539174
blogtalkradio.com/tworawfourtv #therevolutionwillnotbetelevised #AustinBombing #TexasBombing #racewar #RatchetRevolutionary #Pickaside #BlackDivinity #BlackSupremacy #ifyouhearmyvoicethenyourepartoftherevolution
Posted by 2Raw4TV at 3:32 PM