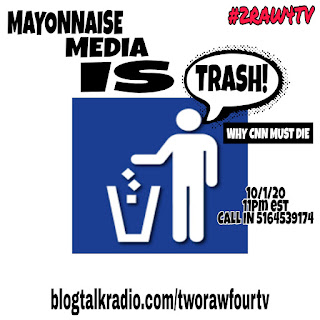 Every time you turn on the news they are lying to you. Whether it be the scores of sick #covid19 patients flooding the emergency rooms  or #kamalaharris imaginary Black support, the mayonnaise media can't help but to fib. Maybe some moron will believe it, maybe. They do not even apologize when caught in these lies anymore, they just bulldoze more lies on top of it that's fits their preordained narrative. Then some pink power broadcaster with a wig and too much makeup on looks you in your eyes and calls this "News". TRASH!! Next #2RAW4TV we will examine why more then ever mainstream media lies,  Why the rise of Black magic communication means the end of #CNN, and the end of the worst #whitelie. MAINSTREAM MEDIA IS TRASH: WHY CNN MUST DIE.
Join us
10/1
11PM EST
CALL IN 5164539174
blogtalkradio.com/tworawfourtv
#therevolutionwillnotbetelevised #BLM #ARYANBROADCASTINGCOMPANY #ABC #NOTHINGBUTCAUCASIONS #NBC #MayonnaiseMedia  #BlackWholeEffect #BlackDivinity #BlackSupremacy #Blackrulingclass #ifyouhearmyvoicethenyourepartoftherevolution #2RAW4TV
Posted by 2Raw4TV at 6:47 AM No comments:

Email ThisBlogThis!Share to TwitterShare to FacebookShare to Pinterest
Labels: 2 Raw 4 TV Shows, About Us

LISTEN TO CIVIL WAR PART TWO: pink POOR VS PRIVILEGED pinks and why BLACKS need to stay out of it 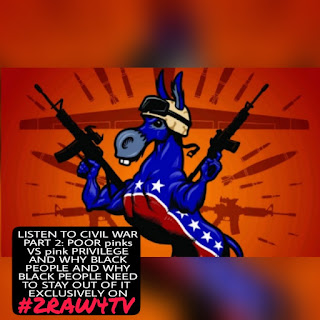 LISTEN TO CIVIL WAR PART 2: POOR pinks VS pink PRIVILEGE AND WHY BLACK PEOPLE NEED TO STAY OUT OF IT EXCLUSIVELY ON #2RAW4TV 👉🏿 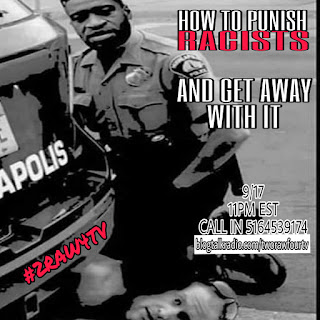 Time after time we see how acceptable racially motivated violence against Black people is to America. Trayvon Martin was a teenager when he was shot and killed for going to the store with a hoodie on. His killer is still free. #BreonnaTaylor was stereotyped as a drug dealer and murdered by police in her bed and even though no drugs were found, no cops were arrested. The list of #racist murderers that go free is staggering. In the courts there is not a double standard for race based brutal thugs, there is NO standard. Even poor pink trash can be found "not guilty" if he stood his ground against an unarmed child, depending on how dark skinned they were. Sounds about white. However now the tide is turning and, as Malcolm X said, the chickens have come back to home to roost. Next #2RAW4TV we examine the new trend, now the hunters are becoming the hunted. You don't need a gun, a knife, or even martial arts to get back at these terrorists.  All you need is an open mind and you too can know HOW TO PUNISH RACISTS AND GET AWAY WITH IT. This is just the beginning of something beautiful,  true justice. Join us 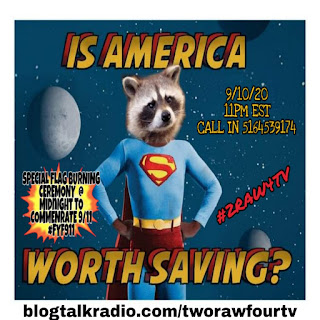 Some say #BLM is tearing the nation apart. That these fiery protests are straining the already strained racial tension and bringing pink people's temper tantrums to a fever pitch. Be afraid of the impending and elusive "#whiterage" to follow. Some say that #DonaldTrump is dividing America. That he is more #racist then any slave owning president in history and that another four years of his orange antics could end America. Really? Have you ever asked yourself IS AMERICA WORTH SAVING? Next #2RAW4TV we explore the ONLY thing collectively "great" for Black people in this land branded America. What's the next step for  Black Americans and why this next step will change every Black person's life worldwide.  Also there will be a special flag burning at midnight of the nations who were truly responsible for 9/11 fuck your flags of pink terrorism  #FYF911! we will not go quietly! Join us
9/10/20
11PM EST
CALL IN 5164539174
blogtalkradio.com/tworawfourtv #therevolutionwillnotbetelevised #blacklivesmatter #antifa #proudboys #wwg1wga #maga #DonaldTrump #JoeBiden #kamalaharris #BlackWholeEffect #BlackDivinity #BlackSupremacy #Blackrulingclass #ifyouhearmyvoicethenyourepartoftherevolution #2RAW4TV
Posted by 2Raw4TV at 12:35 AM No comments: 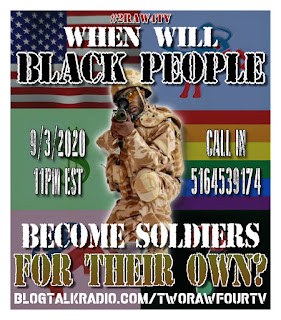 What is the difference between a Black cop and a pink police officer? Since the beginning of this corporation called America Black people have been the strongest hands in armed groups against thier own self interest. Black people were blasting cannon balls at other Black  people to keep pink plantations thriving.  Black people are on the front line for every #USA battle against foreign and melenated countries globally.  Even in some cities Black people make up the number one slave catchers (aka law enforcement agents) in those organizations.  All the meanwhile pink power terrorists are attacking these same Black people when thier uniform is off. Is a paycheck worth it? Next #2RAW4TV we will ask the question that will seperate the sovereign from the savage,  the official from the opportunist, and the true warriors from the weak. WHEN WILL BLACK PEOPLE BECOME SOLDIERS FOR THEIR OWN? Next #2RAW4TV join us and an elite panel of forward thinkers as we answer the question that could change everything overnight. Join us  for this powerful discussion they are to afraid to post anywhere else! 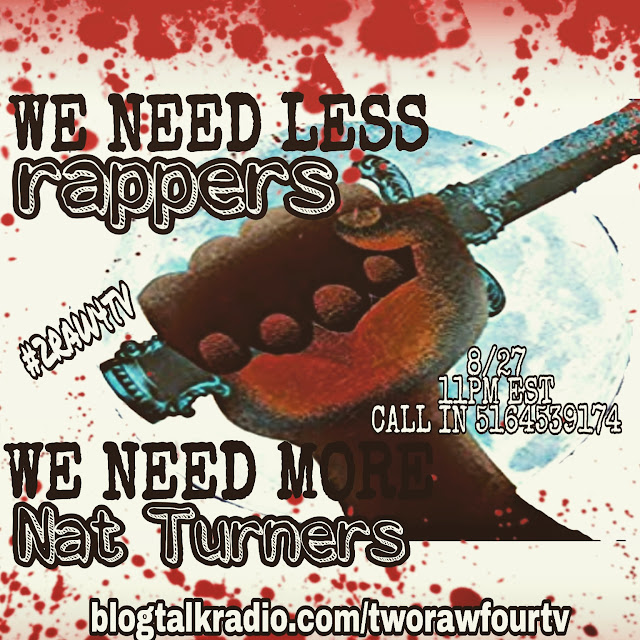 #2NITE #pink rage is boiling. Everyday you hear about  #racist  pink power terrorist shooting  "rioters" and random Black people. Cold blooded murder reclassified as vigilantism. As if they are  ordained by white jesus to save this sinking ship called "America". Somewhere, on a virtual stage, at the same time a heavily armed rapper is rapping colorful rhymes about money he doesn't have, cars he never drove and nothingness,  nothing as relevant as Black people being murdered by mayonnaise monsters in the streets. Were is the disconnect? Why are Black people so unwilling to protect themselves? We need a revolution not a rap about one. Next #2RAW4TV WE NEED LESS #RAPPERS WE NEED MORE NAT TURNERS. We will discuss the power of #hiphop, #WAP, and why rappers need to put down the mics and where they should start aiming their #draco. How we are making this happen in #Atlanta? Will tell you. Plus a look at #Natturner revolt and reveal the New Nat Turners. join us! 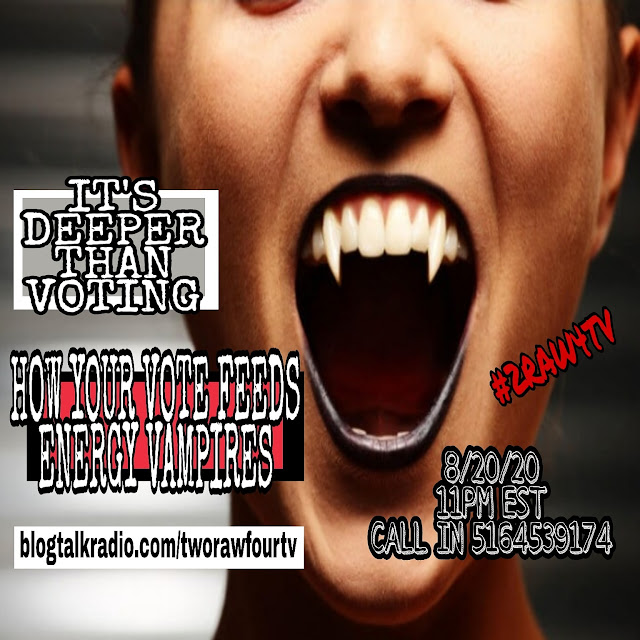 Most Black people aren't going to vote and they shouldn't. There is absolutely no reason that you feel you should or should feel pressured to do so. There is no one with our absolute interest in mind. Both of the promoted parties want a world where you are disempowered or only fighting for the interest of others. They want you to be completely surrounded by symbols of slavery whether it be General Lee statues from the right or a covid mask and vaccine chip on the left it's all the same thing. Who can control Black people better for the purpose of production for the pink empire. Step out of it. Shake it off. Thier game will never give you power, only problems.  Only you can give yourself power. Politics is theater for slaves, you are a conqueror.  This play is over

Next #2RAW4TV we talk about the parasites waiting on a #blackvote, what voting really means, and the most empowering way to use the "vote" energy. join us