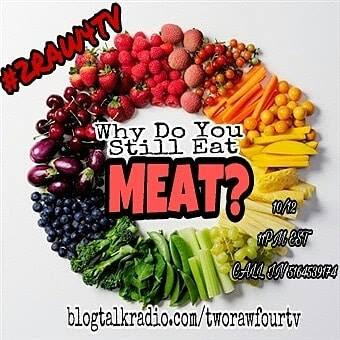 There are a lot traditions that Black people have carried over from slavery. Praising white gods, getting mad at black people first, and abusing children are just a few of the many bad habits that were kept after chattel slavery. One of the most detrimental of these habits however was something that even today is praised and called "soulful". Let's get to the MEAT of the issue. Pork knuckles, chic...ken feet, and chitterlings were are all once throw away foods from massa's trash can to your plate. It's deeper then that though. A lot of ancestors were NOT meat eaters at all prior to slavery. It's deeper then that though. Black people created ALL vegan and vegetarian societies not only in Africa but around the world. With the mountain of evidence about the dangers of processed foods, mercury tainted fish, and artificial "flavors" the question is WHY DO YOU STILL EAT MEAT?
Next #2RAW4TV we will be discussing how to transition into a healthier lifestyle, why even veganism is NOT enough, and we will be talking to organic grower Terrance Crutcher. Be healthy, #StayWoke, and join us
10/12
11PM est
Call in 5164539174
blogtalkradio.com/tworawfourtv
#therevolutionwillnotbetelevised
#veganlife #vegetarian #Fish #talapia #soulfood #meateaters #NoPorkOnMyFork #limitless #BlackSupremacy #ifyouhearmyvoicethenyourepartoftherevolution See More