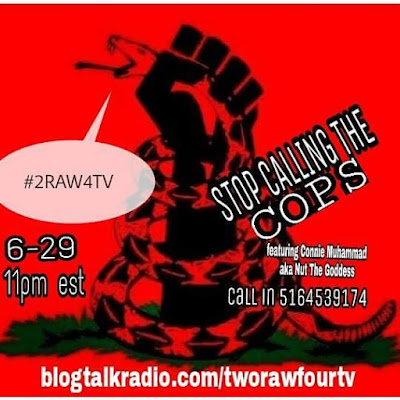 A pregnant  black mother was just recently gunned down in her own home after a brazen robbery. The burglars were not the ones who killed Charleena Lyles, they were long gone. Instead racist police took her life in cold blood after she called them there to protect her belongings. Time after time Black people have been murdered by law enforcement sworn to protect them. It's time to realize police are not on our side. Anybody who is sworn to uphold the law is a race soldier for pink intrest. They are paid to terrorize Blacks and stop the rise of the Messiah. The solution is simple, STOP CALLING THE COPS! Next #2RAW4TV we will discuss how there is successful nationwide movement to patrol our own neighborhoods and handle our own issues without foreign elements causing fatal confusion. Today we take out the terrorists, Thursday night  we take back our world. Concious hop icon , Connie Muhammad aka Nut The Goddess @goddessvisions, talks about her album, the #BlackAlert, and her upcoming performances in Atlanta. This is not fake. This is truth unfiltered. This is 2RAW4TV
6-29
11pm est
Call in 5164539174
blogtalkradio.com/tworawfourtv
#therevolutionwillnotbetelevised #Revolution #NuclearBomb #woke #KKK #Pigs #racist #RatchetRevolutionary #Pickaside #BlackPrivilege #BlackSupremacy #ifyouhearmyvoicethenyourepartoftherevolution
Posted by 2Raw4TV at 8:08 PM