WHO KILLED DARREN SEALS? ..AND WHY IT DOESNT EVEN MATTER ANYMORE 9/15 @ 11PM EST 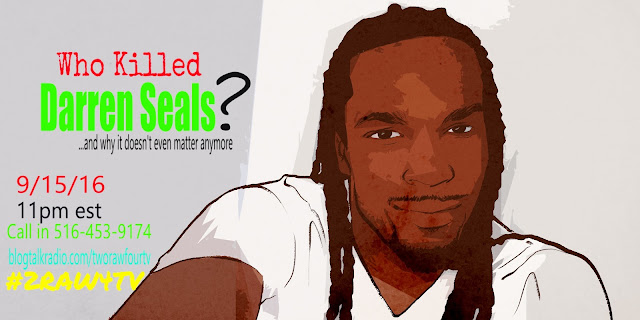 In a desperate attempt to cling to fledgling power the worst of white subjugation is coming out again. Like at the height of the COINTELPRO government program of the 60's, agents of pink privilege are picking off our powerful prominent people in an attempt to derail their impending and absolute destruction. Darren Seals was a well known and respected activist and artist from Ferguson., Missouri recently he was found shot in the head in a burning stolen car. He is the 6th Blackman to be killed in Ferguson in this gangland style murder. Just weeks prior to his assassination Darren Seals was accosted by several STL detectives and told to "Watch the enemies he makes". Who Killed Darren Seals.... and does it even matter anymore. We already know who is responsible why are we waiting on the official response? Are we waiting on the police to police the police? Let's take a moment to remember our warriors in the afterworld and also discuss solutions to combat our worldwide enemy- next #2RAW4TV