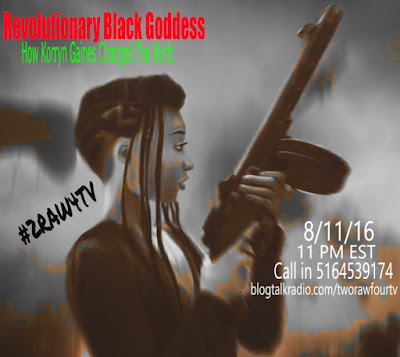 The world can change in an instant if you allow it. There are many incidents of police terrorism, many of which are swept under the rug and never heard about. Korryn Gaines would have been one of those stories if it wasn't for her insistence in journaling her police interactions. While police illegally kicked in her door for unpaid traffic tickets, the goddess Korryn streamed everything live. She wanted to tell her story by any means necessary. It was in this instant that the world flipped on its head. After Facebook deactivated her live stream at the request of law enforcement many people saw just how evil police can get when they don't think anyone is watching. Once inside and unrecorded by live stream police shot her and her fleeing son. While her five year old survived Korryn transitioned to the ancestral realm, not without first setting the world on fire. She inspired people with her militancy,  courage, and brilliance. In her passing the mainstream media has tried to suppress her story. Korryn Gaines is the glitch in the matrix, Korryn Gaines is waking people up, Korryn Gaines is destroying the paradigm, Korryn Gaines has changed the world. Next 2RAW4TV we will give inside information that the media will not discuss, talk about the rise of the revolutionary Black goddess, and the impact this is having on the current revolution. We will also be speaking to Katib, the National Youth Minister for the New Black Panther party in this epic discussion, join us!