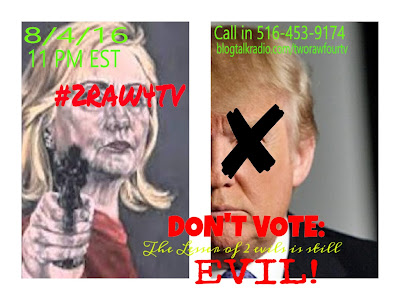 The lesser of two evils is still evil. November is coming quickly which means another presidential election. People, publications, and the press are campaigning hard to get their puppet sitting in the oval office. The top candidates supposedly are completely different from one another but both: support oppressive bigotry, are  lackeys for the big banks and wall street, are interwoven in the status quo which keeps a segment of the population on top financially off the backs of the poor. In fact the similarities are deeper then even that. They say our forefathers fought and died for us to have the right to vote, but they also fight and died to keep us from being enslaved. No matter who gets into office the people who are the fuel for this country will not benefit at all and potentially will be disenfranchised further. You don't have to vote to have your voice heard. You don't have to cast a ballot to cast a spell. You don't have to pick the smaller devil when both would throw you to hell. Think independent, be independent, and DON'T VOTE! Next 2RAW4TV we will discuss how to make substantial real life change without furthering an evil system. Also stellar artist TRUE GOD, will join 2RAW4TV to talk about his new projects plus add on to this epic and controversial subject