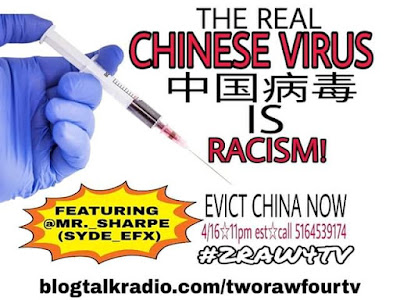 #Coronavirus has everybody showing their true colors (or lack thereof). Ever since the pandemic started the media has been trying to put a Black face on this ailment. You had Black celebrities and athletes that supposedly caught it while there were still zero Black deaths related to #covid19. Of course, the media ate it up. Then it hit American soil like a ton of bricks. Hundreds were hospitalized and dying. Many of whom were Black. The media lavished at the opportunity and with some celebrity endorsement, shady statistics, and even cooperation by the White House they tried as hard as they could to paint this problem Black, even though Black people weren't the first ones (or even the first 1000) sick and still not the main ones suffering,  to some it became Black issue. This is all it took for #Racists worldwide to run with it. Leading the racist charge was China, who at this very moment are evicting, profiling, and terrorizing Africans in their country. Just prior to this #China and its people were calling names like #Chinesevirus and #kungflu racist but then they turn around and participate in violent racism towards Black people in the East. It's time to say 再见 (goodbye) to China! As long as they stand for #racism we will not stand for them, or their products,  food, or services. Next #2RAW4TV we will talk about the worldwide dropping of everything Chinese and why it is absolutely necessary. We will also be talking to @mr._sharpe about his music, China, and the next move. THE REAL CHINESE VIRUS IS RACISM! EVICT CHINA NOW Join us for this epic action oriented discussion
4/16
11PM EST
CALL IN 5164539174
blogtalkradio.com/tworawfourtv #therevolutionwillnotbetelevised #RacistMcdonalds #xenophobia #chinesefood #中国病毒 #boycottchina  #BlackLove #BlackDivinity #BlackSupremacy #BlackRulingClass #ifyouhearmyvoicethenyourepartoftherevolution #2RAW4TV
Posted by 2Raw4TV at 5:48 AM