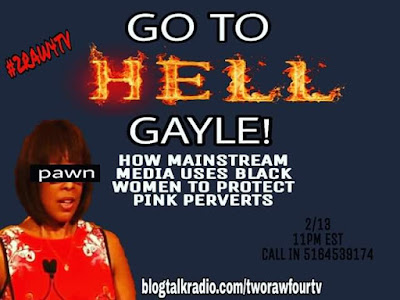 Wherever #Hollywood goes Black exploitation follows. Right after the tragic death of #NBA legend Kobe Bryant millions of people were in a state of mourning. To many #Kobe was a god amongst men. His humanitarian aid and spirit lifted up many and he inspired children worldwide with his long track record of athleticism, dedication,  and philanthropy. He seemed to genuinely enjoy helping people. This did not stop mainstream mayonnaise media from assassinating his character before his body was even cold. A "journalist" whose major claim to fame is her questionable association with #Oprah, Gayle King, tried to push a narrative about Kobe being a sexual predator and rapist. A years old claim so flimsy that it was dismissed and dropped before it could even get to court. This wasn't the first time Gayle had done this, not even the second or third time. She has a pattern of demonizing and slandering Black men, meanwhile never saying a word about the proven demented sexual deviants that cut her paycheck and perverted pink pals she hangs with. Sadly, she is not the only one boldly bashing Black men with a bullhorn. There are many more like her that will say anything their pink puppet masters wants them to say. It stops now. Next #2RAW4TV we will be putting the final nail in the coffin of the dead and demonic major news outlets and expose them for what they are, propagandists for pink power #racism. It ends with us. No longer will we tolerate a single foul word out of the lips of those who wish us harm. Mainstream media is dying and this Thursday we will kill them publicly. GO TO HELL GAYLE! HOW MAINSTREAM MEDIA USES BLACK WOMEN TO PROTECT PINK PERVERTS join us for this absolutely must have discussion.
2/13/20
11PM EST
CALL IN 5164539174
blogtalkradio.com/tworawfourtv #therevolutionwillnotbetelevised #CBS #NBC #ABC #FOX #hollyweird #GayleKing  #CharlieRose #harveyweinstein #firstthem #BlackMedia #BlackDivinity #BlackSupremacy #BlackRulingClass #ifyouhearmyvoicethenyourepartoftherevolution #2RAW4TV
Posted by 2Raw4TV at 4:22 AM