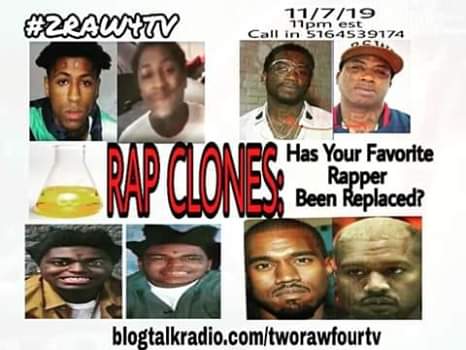 If they can not make you then they will try to take you. Black people that are influential and have a voice in the community are all potential threats to the status quo, no matter what they say because at any time they can wake up and say something different, something empowering. Often when these figures rise up they (those that live by the status quo) kill them and replace them with someone else with a more watered down message. They shot Martin and gave us Jesse. After #MalcolmX was murdered #Farrakhan attracted his following. #FarrahGrey doesn't deliver the same revolutionary message as his father, Khalid Muhammad. Now with the advancement in technology they can potentially replace you with you... and no one can tell the difference, until now.
Next  #2RAW4TV we explore rappers getting replaced by clones of themselves. We will bring proof that some of these rappers are not themselves but a scientific experiment meant to fool the masses. RAP CLONES: HAS YOUR FAVORITE RAPPER BEEN REPLACED? The evidence will astound you, join us
11/7/19
11pm est
Call in 5164539174
blogtalkradio.com/tworawfourtv
#therevolutionwillnotbetelevised #RapClones #gucciman #nbayoungboy #KanyeWest #hiphop #rap #MakeAtlantaBlackAgain #BlackDivinity #BlackRulingClass #BlackSupremacy #ifyouhearmyvoicethenyourepartoftherevolution
Posted by 2Raw4TV at 11:03 AM