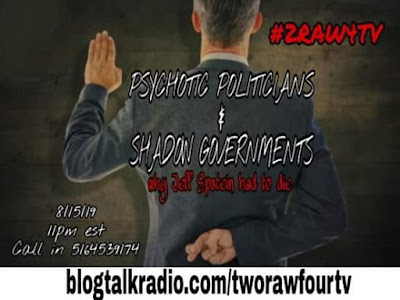 Rarely is anything actually as it seems. Recently, influential investment banker and billionaire, Jeffrey Epstein, was apprehended at an airport by police for a litany of deviant sexual charges including sex trafficking. He was alleged to be running a prostitution ring with sex slaves held at his island reportedly as young as 14. This was no ordinary #pimp. #Epstein was connected to major politicians, business men, celebrities, and current and past US presidents. As he awaited to go to court in a maximum security cell he supposedly committed suicide. Did #jeffreyepstein really kill himself or was pink power merely breaking it's tool? Next #2RAW4TV we will expose the truth behind the cover up. The lies, the spies, and the government that controls the government. PSYCHOTIC POLITICIANS & SHADOW GOVERNMENTS: WHY JEFF EPSTEIN HAD TO DIE. The shroud has been lifted and we will reveal an opportunity for Black people to take what all these agencies only claim to have... power. Turn up #tunein #joinus
8/15
11PM EST
CALL IN 5164539174 *Not T-Mobile friendly*
blogtalkradio.com/tworawfourtv  #therevolutionwillnotbetelevised #humantrafficking #CIA #FBI #MOSSAD #deathcult #BlackDivinity #BlackSupremacy #ifyouhearmyvoicethenyourepartoftherevolution #2raw4tvdashow📺
Posted by 2Raw4TV at 5:17 PM