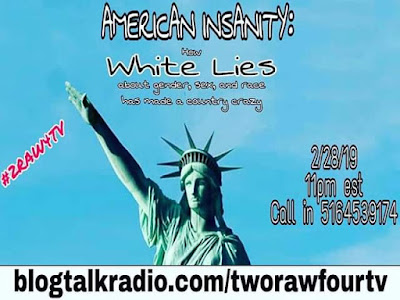 If you sniff hard enough you can smell the crazy, you can taste it on your tongue. After years of trying to #MakeAmericaGreatAgain elitists have thrown in the towel, saving the land of mayonnaise is much harder then letting it all go to a pink putrid waste. The failed experiment known as "America" is done. The original inhabitants of this land are now standing up and reclaiming their rightful position. Instead of paying #reparations, seperation, and gracefully giving up stolen goods they rather send their bad idea of a country to hell, with every one in it. This country was built on lies, and as such, it will be destroyed off lies. Many countries already consider the "American  mentality" a mental disorder, it is only people here that don't realize what's going on. Next #2RAW4TV as we expose the new lies designed to destroy #America from the inside out. AMERICAN INSANITY: HOW WHITE LIES ABOUT GENDER, SEX, AND RACE HAS MADE A COUNTRY CRAZY. The battle is for your mind, and we will not let you be conquered #TurnUp #Turnoffyourtv  #Tunein
2/28
11pm est
Call in 5164539174 *not t-mobile friendly *
blogtalkradio.com/tworawfourtv #therevolutionwillnotbetelevised #ADOS #Oscars #Racist #civilwar #crazy #whitelies #MakeAtlantaBlackAgain #BlackDivinity #BlackSupremacy #ifyouhearmyvoicethenyourpartoftherevolution
Posted by 2Raw4TV at 4:27 PM