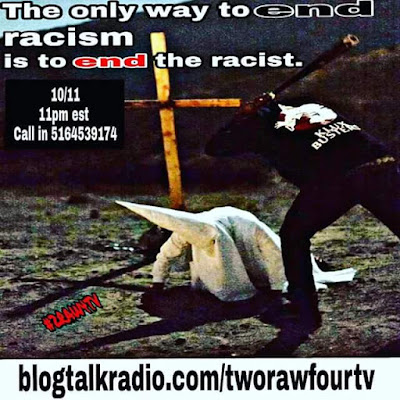 Throughout the time of Black people being held as prisoners of war in the Land of Mayonnaise, they have tried to end the harsh sting of #racism. Not only has racism and #racist behavior still present a great threat to indigenous people in some ways it has become more insidious and deadly over time. If racism could be untaught it would have been through the many months of #BlackHistory since the civil rights movement. If racism could be voted away the election of the first Black president would have done it. If racism truly could be countered by love then the thousands of #interracial couples would have eradicated this plague upon the people. The truth is that racism can not go away by these passive measures. It is engrained into the very fabric of the Red White and Blue flag racists salute and pledge allegiance to everyday. The truth is you can not pray nor procreate it away. The truth is THE ONLY WAY TO END RACISM IS TO END THE RACIST. The racist mind, the racist organizations, the racist rules and regulations must all end. Next #2RAW4TV we will discuss how to truly end racism with a panel of people  that are already doing it now, in real time. This next broadcast will definitely change everything you think you know! Join us #Turnup #tunein
10-11
11pm est
Call in 5164539174
blogtalkradio.com/tworawfourtv
#therevolutionwillnotbetelevised #StayWoke #Revolution #KKK
#whitesupremacy #donaldtrump #policeterrorism #ProtectBlackWomenChallenge #BlackDivinity #BlackSupremacy #ifyouhearmyvoicethenyourepartoftherevolution #2RAW4TV
Posted by 2Raw4TV at 9:05 AM