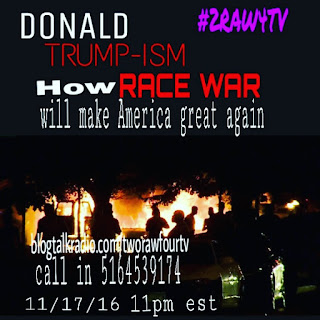 So, it really did happen. America has yet again proved how disgustingly racist it is but electing Donald Trump as president of the United States. Trump was endorsed by white supremacists, racists, and nazis and pink people went in record numbers to express their hate for Blacks, Mexicans, and Obamacare at the polls. While most melanated people didn't vote because of the lack of representation from the canidates, to pink people the choice was abundantly clear. We hear you Donald Trump!  You want to make America white again. There is only one way this can happen and it's on top of the dead bodies of people who are now the backbone of the country. Next #2RAW4TV we explore how Black people interpret Donald Trump's win and what is the next step of the movement? DONALD TRUMP-ISM: HOW RACE WAR WILL MAKE AMERICA GREAT AGAIN
11/17/16
11pm est
Call in 5164539174
blogtalkradio.com/tworawfourtv
#therevolutionwillnotbetelevised
Posted by 2Raw4TV at 9:36 PM