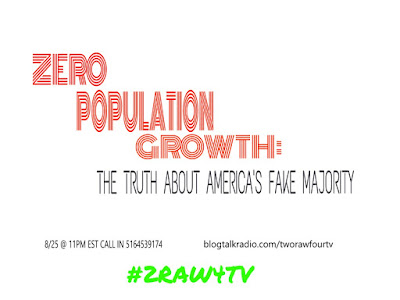 There is no easy way to say this. Everything you have been taught to believe in up to this point is lie. You were taught that since the 60's Black people have been 13% of the population. That is a lie. For every Black person there is 22 pale people ready, able, willing  to take on cosmic warriors. That is a lie. You were told to stay divided, that he was Dominican, while she was Jamaican, and the other was from Africa. That is a lie.
While all these mistruths are being spread the parasite that spawned the miseducation is diminishing at a quicker rate then you can believe. In their desperation they lash out against the original ones in the most violent manner with a promise of increased carnage in the future. Why is this happening? How many enlightened people are there that are taking a stand right now? What is Zero Population Growth?
Next 2RAW4TV we will break down the truth. Why you should never trust the statistics and why the Census has been completely corrupted.
Texas artist, producer, and warrior, Bruce Jones talks about his cutting edge sound, The Black Panthers, and how to be revolutionary! Turn up and tune in