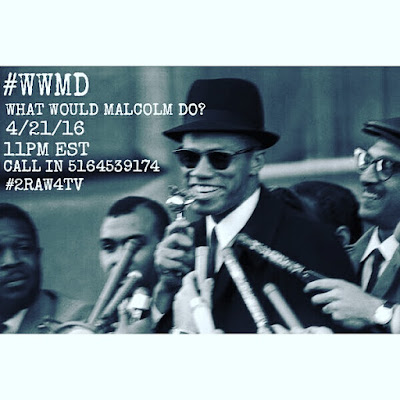 He was a fire that was put out to quickly. Through his life Malcolm was the epitome of integrity, bravery, and rebellion. In this current climate  of brutal police shootings, government sponsored terrorist attacks against blacks, and #BlackLivesMatter protests  where would Malcolm stand? If he hadn't been shot would he now be doing the shooting? If Malcolm gave you a bullet instead of a ballot would he have your vote? Next #2RAW4TV  we will examine this closely and paint of picture of what this a civil rights Era revolutionary  would be doing in 2016. You can't miss this and remember to hashtag #CMXD
4/21/16
11PM EST
Call in 5164539174
Posted by 2Raw4TV at 10:19 PM