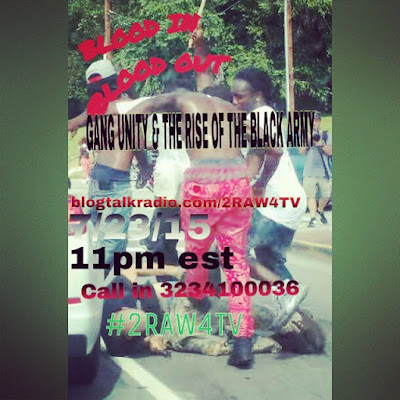 #‎BLOOD‬ IN BLOOD OUT: GANG UNITY AND THE RISE OF ‪#‎BLACK‬ ARMY
Every time mainstream media takes time to focus on the gangs they always do so by casting them in a negative light. If it's not the beef or set tripping, it's shootings and or robberies between rival members. Now even the streets are waking up. They are recognizing they have one common enemy and they are first line of defense. They are gaining ground at a high rate and recently were instrumental in kicking the ‪#‎KKK‬ out of South Carolina. What you are seeing is the rise of the something new the beginning of the Black Army.
Next ‪#‎2RAW4TV‬
7/ 23/15
11PM EST
blogtalkradio.com/2RAW4TV
CALL IN 3234100036
JOIN THE EVENT ON ‪#‎FACEBOOK‬---->
facebook.com/events/518903981598890
Posted by 2Raw4TV at 6:31 PM